For both of our kids, the future is filled with dental work. Patrick’s got a bad crossbite, and Alex’s teeth have always been strange. (He had an extra baby tooth, which we nicknamed “the fang”, for example.) Last Friday we took a relatively simple step that will hopefully make the future work less difficult: both kids had some teeth pulled. For Patrick, it was one molar that was in the way of his adult teeth. For Alex, he needed to get both of his canines pulled. His adult teeth weren’t coming in directly behind them, so the roots weren’t dissolving. 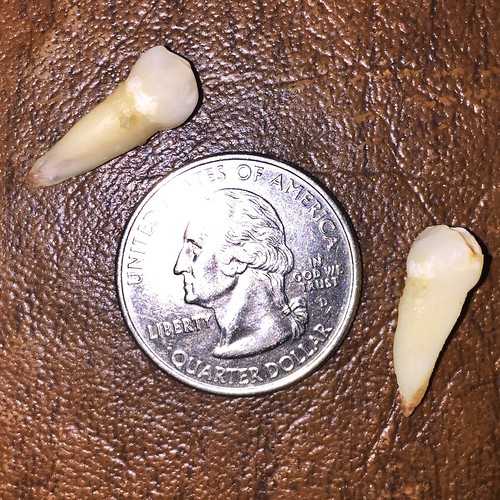 I had no idea that roots were so big.

We’re at an awkward stage with the tooth fairy. A few weeks ago, Patrick asked me, “Are you the tooth fairy? Tell the truth.” I have a hard time flat-out lying when asked a direct question, and evasion and silence didn’t work with Patrick. He kept asking me, so I finally told him, “Yes, we’re the tooth fairy.”

So when Alex brought up the tooth fairy on Friday night, Patrick kept giving me weird looks. He was clearly thinking, “Dad! Why are you letting him go on like this?” After a while, Patrick couldn’t take it any longer and he blurted out, “There is no tooth fairy! It’s the parents!” Molly and I stayed quiet as the younger brother tried to explain to the older brother the ways of the world. Patrick was only half-persuasive. As near as I can tell, Alex now believes that the parents team up with the tooth fairy — the tooth fairy doesn’t have money, so the parents provide that, but the fairy takes the teeth.

That night, both kids put their teeth in special “tooth pillows” that Nana made them. I’m sure Patrick did it because he was thinking, “This is the ritual I have to do to get some money!” But Alex clearly believes: That night, after I left them in their room, he went to the bathroom, took a Kleenex, and on it wrote this note in pencil:

Can you leave my tooths? I just want them for my collection because I think they are cool and I know we took a picture but, with a picture you can’t feel them. So please let me keep them.

Yes, we let him keep his teeth. Molly wrote a return note explaining he can hold on to his teeth for a while, and when he’s done he should give them to his parents for safekeeping. And Patrick? He happily took his money, but then wanted to see where we were keeping all of the old teeth. He wouldn’t stop asking until we showed him the stash we have in our bedroom.

It’s strange having two kids sleeping in the same room but living in different worlds.