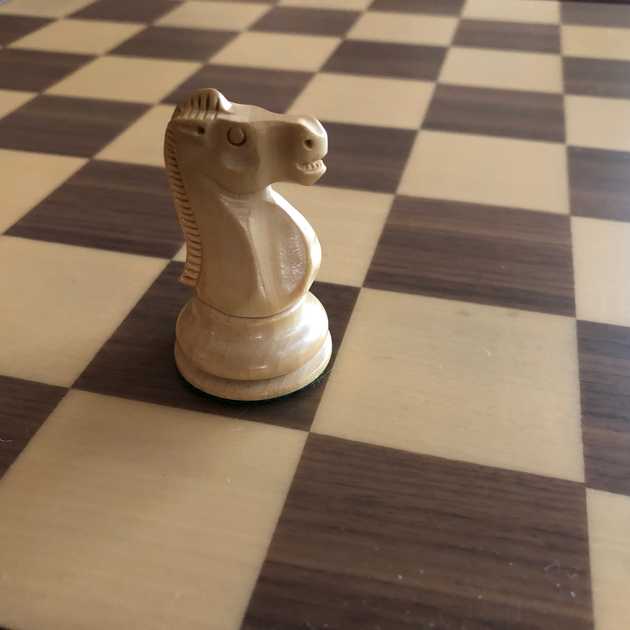 Last year, I bought myself a nice wooden chess set from the House of Staunton for my birthday. It was something I’d wanted ever since high school, but it was too extravagant for a high school student’s budget. One of the perks of middle age is being able to afford the toys that are out of reach to the youth.

In high school, I loved playing the game and got to what I’d call the “strong beginner / weak intermediate” level of play. I read chess books, knew the major tactics, and could use my pieces together effectively in an end game. I had a portable chess board and I played other kids on the bus on the way to school, and I probably had a 50/50 record against other strong math/science brains. While I abandoned the game when I discovered go in college, and then abandoned go as a result of working too obsessively in my twenties, I have a soft spot for chess. As a parent, I wanted my kids to play and enjoy chess too, but beyond teaching them the rules I was never able to pass on the love of the game.

So imagine my thrill yesterday when Patrick said, out of the blue: “Dad, let’s play chess.” We pulled out the board. It had somehow accumulated large boxes of photographs on top of it, which gives you an indication of how long it had been since one of the kids wanted to play. The chess board doubles as piece storage; there’s a drawer on each side that contains each player’s pieces safely nestled in individual felt-lined compartments. The black pieces are real ebony — I’m going to enjoy middle age, darn it.

We set up for the game. Our tradition is I take the black pieces and play without my queen. That’s the only handicap I give him. He may be my son, but I’m still playing to win. Well, mostly. If he blunders in an obvious way I’ll ask him, “Are you sure?” and try to turn it into a teachable moment. But mostly, I’m playing to win.

There are even some real stakes involved. Last year, when Patrick was in the middle of his phase of collecting Yu-Gi-Oh cards, he wanted to teach me to play that game. That sounded pretty miserable, so I deflected: Once he could beat me at chess (a “real” game!), I’d let him teach me Yu-Gi-Oh. That’s a fate I desperately wanted to avoid — so, I play to win. Even with a queen handicap, it was pretty easy to maintain my invincible streak. And thus the chess board wound up buried under photographs.

With the game board set up, Patrick confidently advanced his king pawn two spaces. I matched him with my king pawn. Then I got my first warning that something was different. Patrick said, “I beat the AI all the time now.”

“The computer. I play on my iPad and I beat the computer all the time.”

I had no idea he’d been playing chess at all. With wide eyes, I looked over to Alex, who’d come over to watch us play. Alex said, “Oh yeah, he played a couple of games on the plane back from St. Louis.”

I looked back at Patrick. I think there was a twinkle in his eye.

Every move he made was solid. Not brilliant, I don’t think — but I’m not at the level of “brilliant,” so can I judge? But solid. In the past, I could just set a trap, wait for him to fall into it, then grind whatever advantage I’d gained into victory. This time, he didn’t fall for any traps. We traded pieces, a huge disadvantage when you start down a queen, and soon he had the initiative, a queen and rook with full command of the center, and he deftly checkmated me. I hadn’t just lost. I’d been crushed.

I’m sure you can imagine his elation as he ran off to tell Molly about my humiliating defeat. First thing this morning, he brought up his Yu-Gi-Oh cards. It’s time for me to learn. So the torch passes, one generation to the next.