Patrick and I were speeding downhill on Fletcher Bay Road when I saw it: The Mile 19 shortcut sign. Turn right on Lynwood Center Road and you stay on the main Chilly Hilly route, which gives you 33 miles of biking around Bainbridge Island. Turn left and you cut off ten miles from the route. In other words, the left turn means you’re done.

I decided to check in with Patrick. I was pulling him along on a tag-along bike. If you haven’t seen one, it’s basically a third wheel that clamps to the seatpost of my bike. Patrick gets his own seat and set of pedals, but I get to help with balance and speed. I called over my shoulder to him. “Patrick, how are you doing?”

“Do you think you can finish the ride?”

I turn right for the full Chilly Hilly route. 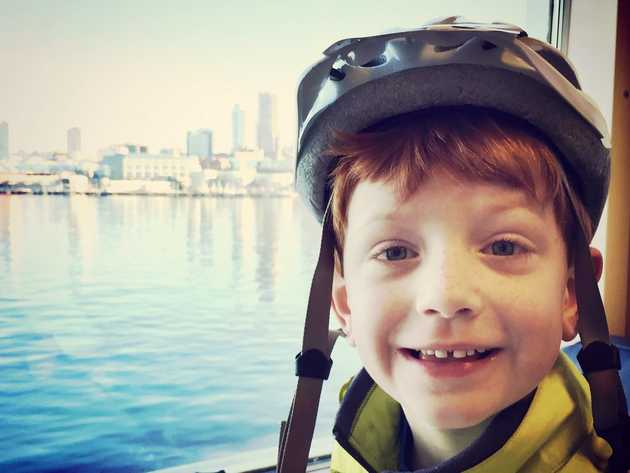 “OK. I was just checking because there we just passed the shortcut. If we took it, the ride would be 10 miles shorter.”

“I want to take the shortcut!”

“I want to take the shortcut!”

“We just passed it!”

“Can’t you stop and turn around? I want to take the shortcut!”

“Patrick, you said you were doing good! Can’t we keep going?”

I spy a driveway ahead, and I pull the bike over so I can easily talk to Patrick instead of shouting over my shoulder. I shouldn’t have told him about the shortcut, I think. I’m disappointed but I try to keep it in check. I’d been looking forward to doing this ride with Patrick, and the shortcut feels like giving up. But you can never tell when kids just run out of gas, and I don’t want Patrick to be miserable just because Dad wants to do the whole ride.

Uh oh. This had been a problem earlier in our ride. Patrick’s wearing some too-big, thin gloves that aren’t up to the task of keeping kid fingers warm for hours of 40-degree weather. A little bit before the ride’s halfway-point rest stop, I had to pull over to warm up Patrick’s hands. I used the trick I learned winter camping back in college: If you need to warm up a companion’s fingers, have them put their fingers on your stomach. There is no truer expression of parental love than letting your child put ice-cold hands up your shirt. I let Patrick do it again, and I also give him a piece of chocolate. The kid probably needs energy, I think.

As he eats, I talk to him. “Patrick, you get to choose. If you want to take the shortcut, we can. But you’ve been looking forward to this ride for a long time. Are you still having fun?”

“Okay. Take a minute to think about it. We’ll do what you decide.”

He finishes eating and climbs back on his saddle, but he doesn’t say anything. He scrunches up his eyes like he’s fighting back tears. Several heartbeats pass in uncomfortable silence.

I don’t answer him. I let him wrestle with this dilemma on his own. Finally, he says, “Keep going.”

“You don’t want to take the shortcut?”

Relieved, I pull out into the next break in the never-ending stream of bicycles and resume pedaling. I don’t know what made Patrick decide to keep going — probably his stubborn streak — but I’m happy so I don’t question his decision.

The geography of Bainbridge Island slaps us hard in the face for thinking “going on” would be easy. Not even a minute after our decision to keep riding, we turn a corner and come to Baker Hill Road, the route’s longest climb. I stare at the line of bicycles in front of me stretching up the hill like they’re biking into the sky. I hope Patrick doesn’t have a change of heart. I repeat the mantra I’ve told him on each of the earlier hills: “OK, slow and steady. We’ll make it to the top.”

Other than a single “Whoa!”, Patrick shows no signs of discouragement. It could be because I do most of the work getting us up the hills. I gear down and start huffing and puffing my way up. Riders passing us offer words of encouragement to Patrick: “Good job pushing your dad up the hill! Way to go!”

“Dad, why do people keep talking to us?” Patrick asks.

One advantage of hills: They warm you up. When we finally reach the top, I’ve overheated in my jacket and I pull over to unzip it. That’s when Patrick whispers to me, “Dad, I have to go potty.” Luckily trees abound on the island. Patrick hands me his gloves and disappears. When he comes back, I hand him the gloves back, but he says, “No, I don’t want them.” I guess Baker Hill Road removed the last of Patrick’s chill, too.

We finished the ride an hour and fifteen minutes after the fateful decision to keep going. The scenery for the rest of the ride was among the best of the trip — miles biking along the water, the inland routes spruced up with plum blossoms. Even Patrick remarked on how pretty it was. We were both in good spirits for the rest of the ride, and I think Patrick was proud of himself when we finally coasted down to the big green “Finish” sign. I was proud of him, too.