This all started because I was bored and surfing the internet.

I came across a blog post about the 12th Annual Polar Bear Plunge over at the Ravenna Blog. As I read it, I thought, “Hmm, if I jumped into Lake Washington on New Year’s Day and drank Hot Tang afterwards, I won’t be so bored. I wonder if I can talk Molly into this?” You can guess how that conversation went. It was quite one-sided… I tried to explain how bringing us and the kids to Matthews Beach to get wet outside on a cold day would be fun. She just stared at me, speechless, like I’d lost my mind. That idea went nowhere.

While I couldn’t talk Molly into it, I was now hooked on the idea of jumping into Lake Washington on New Year’s Day. Hidden at the end of the Ravenna Blog post was another crazy idea, which made more sense to me if I was the only one getting wet: The Resolution Run 5K and Polar Bear Dive. At least I’d get some exercise along with my hypothermia.

That’s how I found myself in a crowd of 2000 runners in the Magnuson Park boat launch parking lot early on New Year’s Day. The smells of chili, hot chocolate, and porta-potties blended in the air. I had arrived an hour before race time to make sure I had time to do my day-of registration. The announcer told us the air temperature was 46 degrees and the water temperature was 46 degrees, so we wouldn’t notice it at all when we got wet. (Ha!) With a jacket and an insulated mug of coffee, I had no problem staying warm during the first part of the morning. I had plenty of time to admire the runners in costume… lots of cardboard “Happy New Year!” hats and tiaras, plus one adult wearing one-piece flannel superman pajamas. He seemed the warmest of us all. There were also many high-school students, obviously on their respective track & cross-country teams, including some keeping warm in State Championship sweatshirts. Although they were less than half my age… or because they were less than half my age, they intimidated me.

At 25 minutes to race time, I stuffed my jacket, warm pants, and now-empty coffee mug into my backpack and turned it into the bag check. Now I was cold. I was wearing only a thin long-sleeved running shirt and shorts. Nothing I did warmed me up. I ran back and forth through the parking lot a couple of times, but the little bit of wind that created made me colder. I bounced up and down like a kangaroo with ADHD. That helped a little. I stuffed my hands into my armpits and kept my arms close to my body to conserve my body heat, and just waited it out.

10 minutes to go: I lined up for the race. Like most races, the Resolution Run sorts the field and puts faster runners near the front to keep things from clogging up. I needed to guess where I should line up. I’ve never run a 5K race before, but with the help of my GPS I’d run two solo 5K runs on the shore of Lake Michigan this past summer. On the second of those runs, I’d just barely managed to beat a 7-minute-mile average for the run. This was one of my big accomplishments of 2013. As a nerdy non-athelete in high school, the 7-minute-mile was the impossible speed of people who got the Presidential Medal for Physical Fitness. (Not me.) I’d never run a 7-minute-mile in my life until last winter, when I pulled it off for a single mile. I’d felt great about sustaining that pace for a whole 5K this summer, and I hoped I could do it again for this race, in spite of the cold. I lined up next to the 7-minute-mile marker.

I immediately felt like an impostor. Around me were the high school track runners and skinny adults who belong to running clubs. I didn’t belong. But at least I was finally warm… having all those people standing close by made things surprisingly comfortable.

With a blast of an air horn, the race started. It felt good to run. All the cold disappeared from my body. I passed some people early as the field spread out, but I was passed by many more. As I heard each set of footsteps approaching from behind, I thought, “Hmm, will I be able to keep up with this person?” The answer was always an undeniable, loud, definitive, “NO!” I proved myself the impostor; these fleet-footed people passing me were the _real _runners. One couple carried on an easy conversation with each other as they passed me, while I struggled to maintain deep and even breathing. And the race leaders? They were so far in front of me they may as well have been cheetahs or gazelles running, not people.

But this is why I’m still enjoying my late-in-life discovery of running: The real competition is with myself. All those other runners are my allies. When my body wants to slack off or coast, I fight it with the adrenaline and motivation they’re giving me. As a result, with each race I’ve done better than the one before. So far that’s an amazing and addictive thrill. I know it can’t go on forever… a plateau is coming, sometime, and age will eventually catch up.

But New Year’s Day 2014 wasn’t that day. According to my GPS, the first mile of the race was by far the fastest I’ve run in my life (6:07), and I finished the whole race in 19:42. That’s a 6:22 pace if you believe the race was a real 5K… my GPS says it was short and it was more like a 6:35 pace. Whatever! That’s still so much faster than anything I’ve run in my life, over any distance. I still can’t believe it. I’m going to turn 40 this year but my body still surprises me with what it can do.

And the plunge into Lake Washington? I did it, and submerged myself completely… and honestly, didn’t even feel it. Even once the race was over I didn’t feel cold. My squishy wet shoes were my only discomfort.

While Molly & the kids weren’t there for the cold & the waiting, they did come for the post-5K Kids’ Dash. Both kids had a blast… but jumping in the lake was not an option for them. (Parent’s orders!) 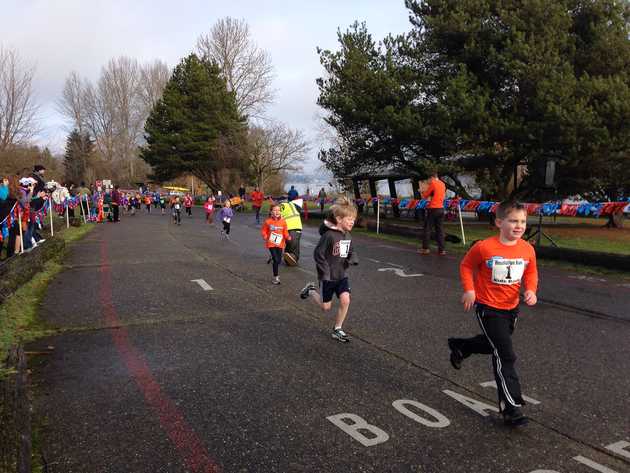 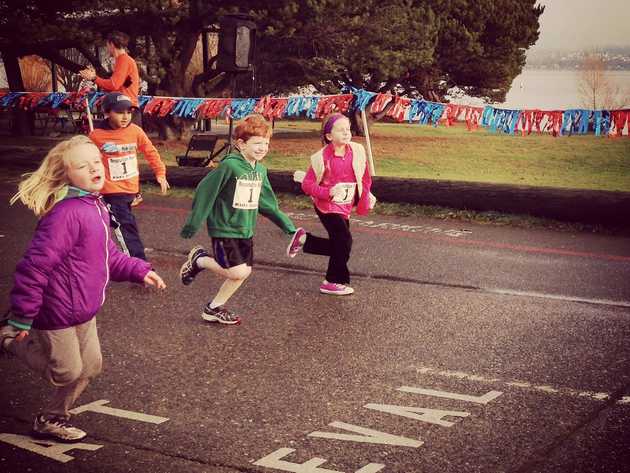