Monday was a special father/son bonding day. Microsoft doesn’t have the day off, so it was just me and the boys. I decided to celebrate by taking the kids back to the Point Defiance Zoo and Aquarium. Our last trip there was a little over three years ago, which is just so odd to recall. In my memory of that day, Alex seems so old, yet he was younger then than Patrick is now. Memory plays odd tricks, I guess. As the eldest, Alex will likely always seem old in my memories, and my mind will always refuse to accept that Patrick is growing up at all.

One nice thing about our trip to the Point Defiance Zoo is we actually saw animals. That may seem an odd thing to say until you tag along with our family on one of our trips to the Woodland Park Zoo in Seattle. The kids now have a routine that involves remarkably little animal watching. They love getting the kids’ mac & cheese meal at the Rain Forest Pavilion (it is remarkably good mac & cheese). Then they head over to the Zoomazium for a good twenty minutes of climbing and sliding. We always have to drag them out of there to see the animals.

In contrast, our trip to Point Defiance was filled with animals. It started the moment we walked through the front gate, when we found the two free-roaming peacocks. One of them was safely perched in an area beyond the reach of kids. The other, unwisely, was right on the main walkway. I had to keep sternly reminding Alex and Patrick, ”Don’t scare the peacock!” 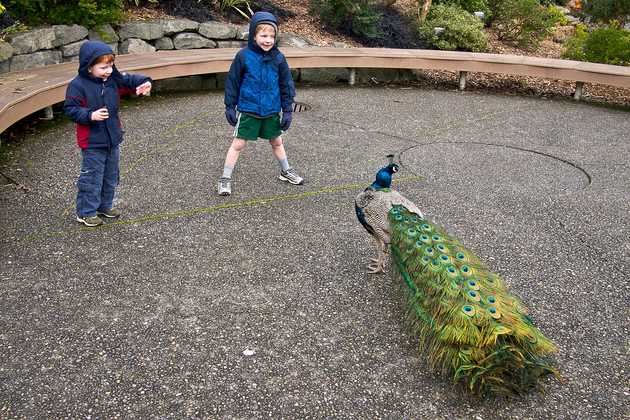 I don’t think it worked, because it didn’t take too long before the bird was in full look-at-how-big-I-am-BEWARE! mode with his tail. (Although, in my kids’ defense, the peacock spent most of his time facing down an oncoming stroller with his tail on full display, so perhaps that was scarier than my boys.) 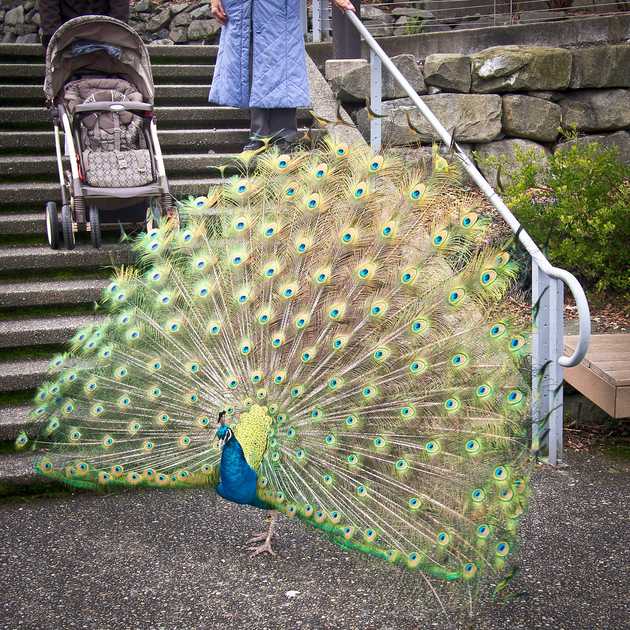 As we made our plan to see the zoo’s sights, we each picked an animal we wanted to see before we left. Patrick picked the walruses, Alex wanted to see the meerkats, and I picked the polar bears. We chose well; each animal visit was cool in its own way. The meerkats themselves weren’t any different than the ones in Seattle, and they didn’t hold the kids’ attention that long. However, they were in the zoo’s outdoor Kids’ Zone, which really set both Alex and Patrick’s imaginations on fire. It didn’t take long for Alex to start pretending to be a hermit crab:

…and Patrick found a kid-sized nest and transformed into a baby bird. He spent the rest of the zoo visit flapping his arms like wings.

The walruses were amazing because they were so big yet so graceful in the water. (The zoo’s male walrus weighs over 3000 pounds!) It was hard to pull Patrick away from the underwater viewing area where he watched these giants glide silently past, over and over.

But the real stars of our visit were the polar bears. By pure luck, we got there just as the zookeepers started feeding the bears. Instead of watching white furry rocks sleeping, we got to see the ten-foot-tall bears swimming through the water to catch their fish, just inches from our faces. It was the coolest thing I’ve seen at a zoo in a long time.