Wow, we didn’t have places like this when I was growing up!

I have fond memories of summers spent at the wave pool at Cameron Run Regional Park. But that’s nothing compared to what kids can do at Great Wolf Lodge. For starters, we could only enjoy Cameron Run during the hot summers… but not too hot, because you can’t be in the pool during a thunderstorm!

The water park at Great Wolf Lodge is indoors, though, so even on a dreary, damp, February weekend – when everyone on the East coast is digging out from two feet of snow – you can spend lots of time getting wet. And there are a lot more ways to get wet, too. Sure, there’s the wavepool, but there are also innovations like The Giant Water Bucket, which is easier to show than explain:

The kids had a wonderful time. Patrick was a little hesitant at first, but he eventually warmed up and had a blast going down the water slide (over and over and over again).

Alex had one little adventure with Molly down the big water slide – a long fast ride for multiple people in a raft. He only did that once, though, because he didn’t like waiting in line. He spent most of his time playing in the kiddy pool with his brother.

The rest of the resort is clearly optimized around keeping little kids entertained, and extracting as much money from parents as possible while doing it. The big draw outside the water park is a scavenger hunt game called MagicQuest, which involves waving a magic wand at different items throughout the hotel. Apparently, if you do the full game, it takes 4 hours and you walk 10 miles up and down stairs, which makes the $25 seem a bargain. What else occupies kids that long and gets them that tired? (We got Alex a wand, but didn’t enter him in the game… he could just wave it at things to make them move.)

Overall, it was a successful trip. Both Patrick and Alex loved every single minute of it. In spite of the cost, I bet they’ll drag us back again. 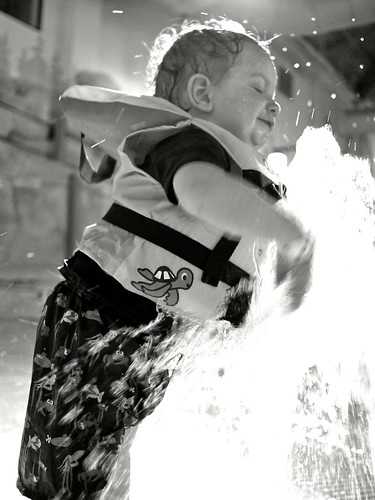 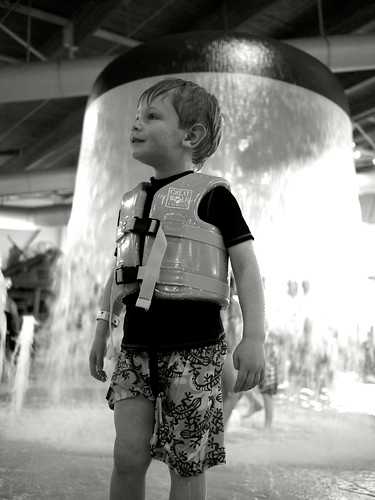