It’s pumpkin patch time! Prior to having kids, I never visited a pumpkin patch. I’ve also never been that big into jack-o-lanterns, and I’m content making pumpkin pies from a can. However, ever since Alex has been old enough to waddle around, I’ve relished our October pilgrimages to the pumpkin patch.

On Saturday, we went to The Farm at Swan’s Trail in Snohomish. One of Alex’s old classmates from daycare organized this trip. It was our first time to this farm. Compared to our usual farm (South 47 Acres), it’s a longer drive to get to Snohomish. The rewards are views of Mt. Baker and a lot of activities. I’d say that The Farm at Swan’s Trail is 3 to 4 times larger than South 47 Acres. We met two of Alex’s classmates there. We were supposed to meet a third classmate, but the farm was so big that we never crossed paths!

The kids had a grand time. The clear favorite activity of the trip was the hay maze. Inside a dark barn, there was a maze from hay bales stacked two high. Adults had no problem seeing over the hay, but it must have been kind of spooky from a preschooler’s point of view. Alex kept saying he was scared in his first trip to the barn. However, it didn’t take too long for all three kids to get over their fear of the dark. Soon they all learned the quickest way through the ground floor of the barn, up the stairs, and over to the wobbly purple slide that sped them down to a pile of soft, itchy hay. The kids kept running and sliding through the maze for a solid half hour. They would have kept going for a lot longer if the parents hadn’t presented a unified front that we had to do something, anything, else.

We lured the kids out of the hay maze and into the “play area.” This was a large, fenced off compound at the farm (with a separate $5 admission). Inside the play area, they had a huge pit of hay for climbing and jumping, big slides made from industrial plastic tubing, an enormous pit of corn kernels. (Think of one of rooms full of plastic balls, like you’d find at Chuck-E-Cheese or xkcd, only substitute “corn” for “plastic balls,” and you’ve got the right idea.) The play area was totally worth the $5 admission. 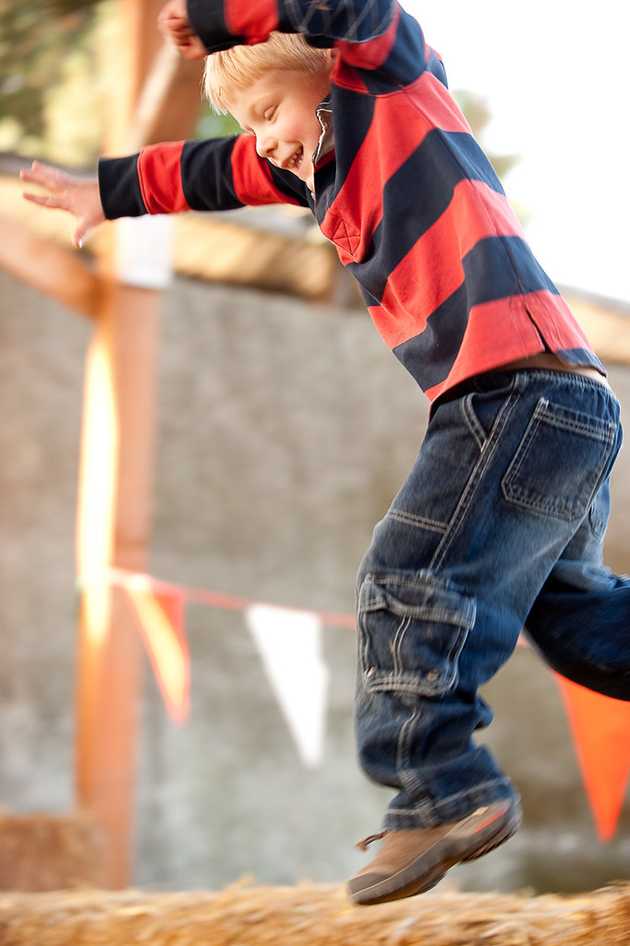 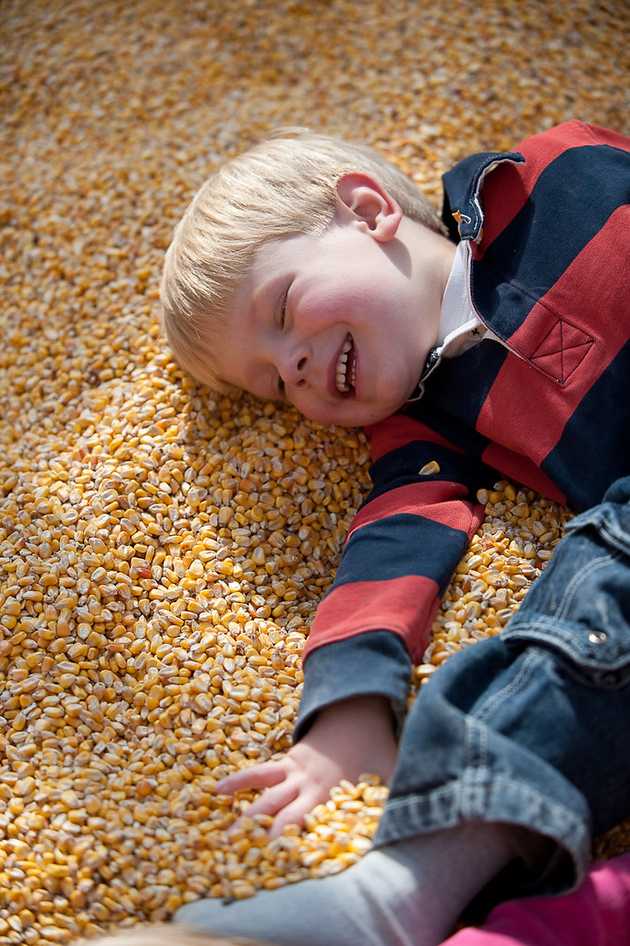 In between those major attractions, we found time to visit the petting zoo, watch a duck race, and watch a dramatic reenactment of the Three Little Pigs. Oddly, the one thing we didn’t see much of were pumpkins. Sure, they had a few pumpkins on display that weighed more than our entire family combined, but we didn’t see the fields full of pumpkins. I’m sure they were there, somewhere, but The Farm is so big we missed them. 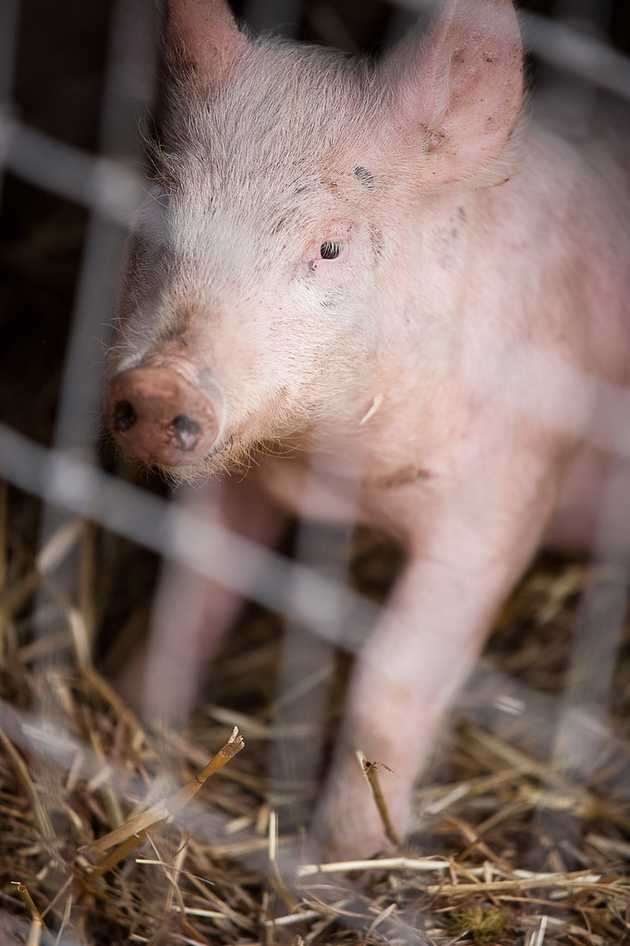 Luckily, we returned to South 47 Farm on Sunday. This was a much more mellow excursion. It didn’t have a hay maze or a play area, but it did have a big field of pumpkins visible right from the parking lot! Alex and Patrick had a great time picking out pumpkins for us to take home. (I suppose a more accurate description of the process is Alex put every pumpkin he could pick up into our wheelbarrow. Our job was to “edit” his selections, or we would have brought the entire field home with us.) 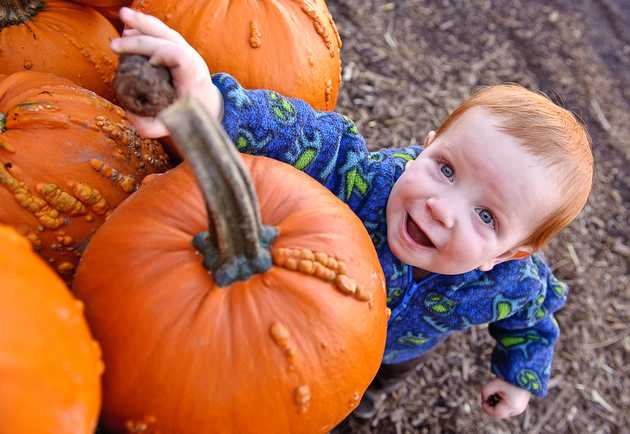 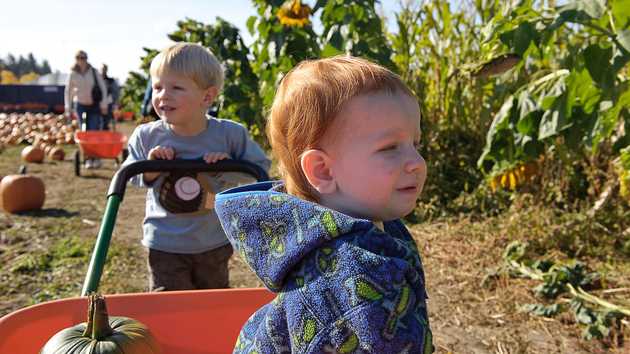 All in all, it was a great weekend. Lots of fun, lots of time with friends, lots of time outside. I hope the rest of October is this nice!