How does the human race survive?

I ask this because our young have no instincts or common sense. What did our young do out on the Serengeti? 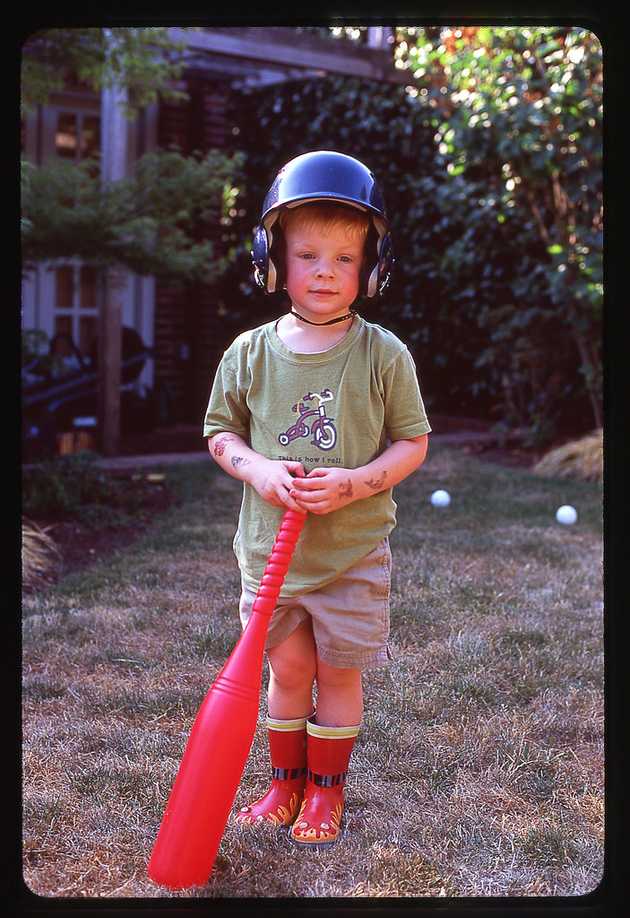 Yes, here he is all dressed up to play baseball, arms covered with tattoos, wearing shorts and fireman rain boots in the middle of one of the driest summers we’ve had in Seattle. I don’t remember for sure, but I doubt he’s wearing socks. I guess he prefers the sweaty, clammy feeling of bare feet inside impermeable rubber. It’s not just Alex. It seems that all kids like to wear rain boots at inappropriate times. I guess if homo habilis had known how to harvest rubber, their offspring would’ve roamed the parched African plains in saber-toothed-tiger rain boots, too.

Then there’s The Great Blue-Bear-Up-The-Nose Incident of 2009. (Do I really need to elaborate? The title says it all.) Molly & I were happily at work last Tuesday when we got the dreaded phone call from daycare. “Alex has put something up his nose,” the daycare director told us, “and it’s so far in there we can’t see it any more. We think you need to take him to the doctor.”

Both Molly & I cleared our morning schedule and rushed over to daycare as soon as we could. When we got there, we got some more details from the teachers. Alex came over to them crying. He said his nose hurt, and that he’d put a little blue bear in his nose. The first teacher looked and thought he saw something. The daycare director looked but couldn’t see anything. The teachers were a little confused, because while they do have a blue bear in the classroom, it seemed too big to fit up into a child’s nose.

While Alex was upset when they called us, by the time we got there, he was calm and happy. He wasn’t in any discomfort at all. And as worried as we were, the doctor’s office had a different perspective. “Is he breathing?” they asked when Molly called.

The doctor’s office was smart. When they finally saw him, they confirmed what we suspected – there was nothing in his nose. Our suspicion is he put something large in his nose, it hurt, and he pulled it out. As it’s hard to get a coherent or reality-based story out of him at this age, I’m not surprised he told the teacher the bear was still in there. I guess pulling the bear out of his nose on his own counts as a tiny bit of rational instincts, but I’d be more impressed if he wasn’t tempted to put things in his nose in the first place. The doctor gave him a stern lecture. We’ll see if that works. (“_Nothing in your ears, nothing in your nose, nothing in your mouth except food.” _Words to live by.)