Since I lamented about the black-box nature of performance engineering in SwiftUI two days ago, I spent some time familiarizing myself with the SwiftUI tools inside of Instruments. While I’ve made some headway, I’ve also hit a wall.

First, some context. As I mentioned earlier, Captain’s Log is a simple habit-tracking app that I want to use as a playground for experimenting with streaks, streak freezes, and the psychology of motivation. It’s currently a document-based app that stores its data in a plain text file. Right now there are only two screens. The main screen shows a day’s status on each habit and a calendar to help visualize how each streak is going. Then, there’s a second screen to tweak any additional details for completing a habit. (For example, to prepare for exiting quarantine, I’m trying to ride my bike at least a little every day. When I record a bike ride in Captain’s Log, I track how long and how far I ride.) 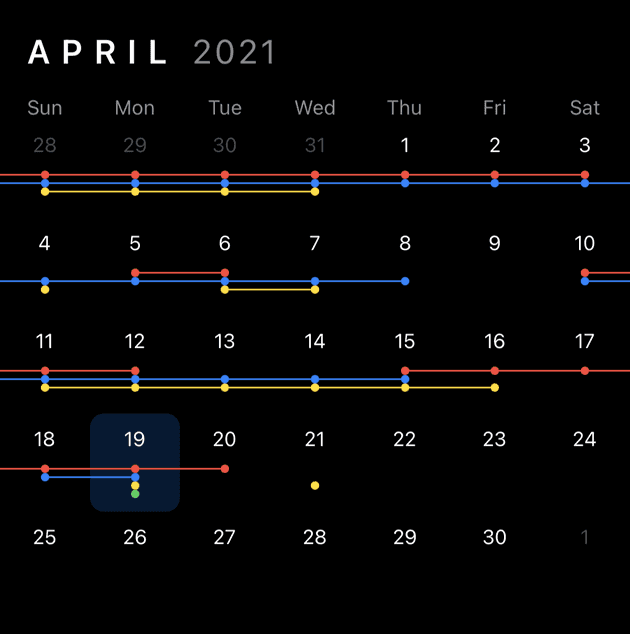 While performance isn’t terrible, there are noticeable lags in several interactions. For the past two evenings, I wanted to eliminate one of the lags: There is a noticeable delay processing keystrokes in the edit form, with the first keystroke being the worst.

Here’s what I learned after a few days poking around with the SwiftUI tools in Instruments.

I don’t know how to debug this further. This is exactly what I meant when I wrote earlier about the inherent tension between declarative UI frameworks and performance tuning. I’ve described what I want in my UI (“a monthly calendar with line segments showing how long I’ve maintained different streaks”). There are probably things I can do to make that “what” even more efficient. However, code I don’t understand and has don’t have access to has decided the “how” of making my app work involves recomputing that calendar on each keystroke. I don’t know how I can make the app responsive without having the ability to influence that “how.”

Since Captain’s Log is a toy app meant for me to learn, I’m just going to leave things as is and hope that Apple provides better performance guidance and tools at WWDC 2021.