Be Careful What You Wish For, Winter 2016 Edition

Last winter, we didn’t ski because there was almost no snow in the mountains. The nordic trails at Hyak never opened.

This winter, we missed half of the kids’ first cross-country ski lesson because there was too much snow. This was our view for two hours on Saturday morning:

Less than a mile in front of us, the DOT had closed I-90 while they cleared multiple stuck vehicles. It could have been worse, I suppose; yesterday, I-90 was closed for most of the day at the mountain pass because the avalanche danger was too high. Growing up in Virginia, I never thought I’d live in a place where “avalanche danger” would be a phrase you’d hear in traffic reports. Still, snow and bad traffic is still makes for a better Northwest winter than no-snow. If you can’t escape to the mountains, the lowland gray and drizzle is just too dreary after a while.

Skiing has finally clicked with the kids. We did three half-day downhill lessons at Stevens Pass this winter. By the end of the third day, Alex could confidently ski down all of the green runs and was starting on the blues. Patrick’s still on the bunny slope, and he’s good at turning right. With his stubbornness and daredevil attitude, I think he’ll be unstoppable shortly after he masters “left.” Both kids prefer their cross-country ski lessons, though. Cross-country has a lot less waiting around and a lot more lets-play-outside.

I’m glad this year’s giving us more snow to play in. I just hope we avoid the “too much” snow problem for our remaining weekends! 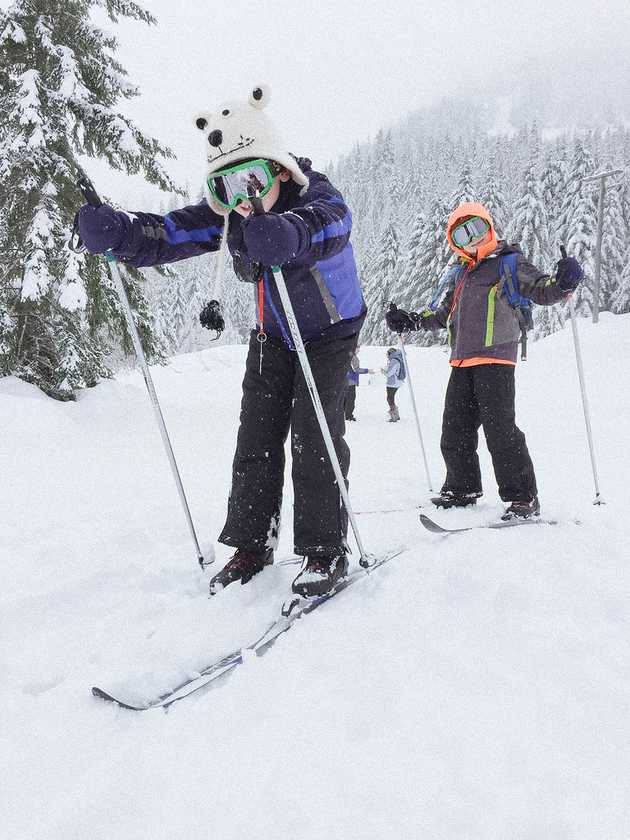