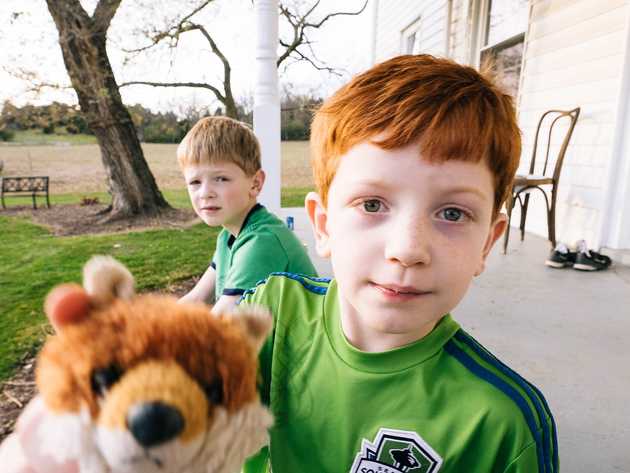 The next generation disappoints me a little. Patrick figured out several months ago that there’s no tooth fairy (though he still puts his teeth under his pillow and expects money in return). Yet he didn’t make the leap from “There is no tooth fairy” to “There is no Santa.” He has been getting more curious, though. Two years ago, Alex asked the questions about Santa. Now it’s Patrick’s year. “I’m just trying to figure out if it’s the parents,” he explained to me on the way to school on Monday after one interrogation session. I have a hard time telling a flat-out lie, so when he asked me, “Are you Santa?”, I just said nothing. Somehow that dodge worked. He didn’t press the issue. I don’t think he’ll be a good investigative journalist when he grows up.

Last night, yet another tooth fell out of that boy’s head. More precisely, Alex the Dentist yanked another tooth out of Patrick’s head. (Alex has pulled almost all of Patrick’s teeth.) While Alex was downstairs telling Molly, my conversation with Patrick went from the nonexistent Tooth Fairy to Santa, and I finally told him The Truth. Watching his face, I could see his emotion quickly change from disappointment to elation that he’d figured it out. I told him not to talk about this at school and he was obviously thrilled to be in on a secret.

Patrick thought we shouldn’t tell Alex about Santa, too. “Would that be fair?” I asked. He agreed it wouldn’t, so when Alex came back upstairs he happily blurted out, “Alex! Mom and dad are Santa.”

I think I’ll carry this next parenting memory to the grave. Alex looked at me, confused and trusting. I nodded, confirming what Patrick had said. Alex immediately started crying. A little bit of his soul got crushed right in front of my eyes. While it didn’t take too long to cheer Alex back up (Christmas isn’t canceled, he still gets presents), he was still a little somber when I turned out the light. When he woke up yesterday morning, he lived in a world that still had a tiny bit of magic in it, and when he went to bed that magic was gone.