Double-fisting in the Parking Lot

When Alex gets frustrated at something, he now tries to keep himself from crying. He’ll shut his eyes tight and wipe his eyes quickly with his hands. It breaks my heart… to see him in (emotional) pain, to see that he’s picked up the “boys don’t cry” message from somewhere, to see him grow up.

Because he’s been getting more mature each month, it shocks me when he slides back and has bad days. Saturday was one of those. We decided to spend part of the afternoon learning to ride his bicycle. It’s a struggle to get him practicing. While he has fun while riding (mostly because he can make me run behind him), he’s so scared each time he starts. We offered a bribe of Baskin Robbins to get him out Saturday afternoon. I talked it up… how good the ice cream will be, how I’ll get my favorite — rainbow sherbet — and how much I think he’d like that too.

Even with the bribe he was defiant, short-tempered, and… well, _six. _(And he had a great time once he started riding.) I don’t know if it was the fear of falling that made him cranky or if something else was making him have an off day. All I know is his bad mood returned at Baskin Robbins, of all places. I don’t even remember what was making him whiny while we were there (I think we were arguing about cups versus cones), I just remember that nobody was having a good time as we ordered. Plus, a little league team was there, so there were no free tables and we had to sit outside in the parking lot. Not a good beginning to what was supposed to be a reward. Alex eventually gets chocolate ice cream with both a cone and a cup, and I get my rainbow sherbet, and we settle down outside.

While we were eating, and trying to turn everybody’s mood around, Alex looks at my rainbow sherbet and asks, “Dad, where did you find that kind of ice cream?”

Thinking he was asking me when I first had it, I answered, “Oh, this has been my favorite since I was a little boy.”

“No… I mean, where did you find it? I looked for it and I couldn’t find it…” He starts looking sad, and Molly and I both realize that he’d been trying to find the rainbow sherbet behind the counter in the tiny, little-league-infested ice cream parlor, when everyone’s tempers were on edge, and he just ordered chocolate because that was the best he saw.

“Alex, I didn’t even look for it because I knew they’d have it. Did you want rainbow sherbet?”

He looks even sadder, and nods his head… and then just breaks down in tears. He was sad in the way that only a little boy can be.

What could we do? We bought a kids cup of rainbow sherbet. Everyone’s day improved. Here he is, double-fisting in the parking lot: 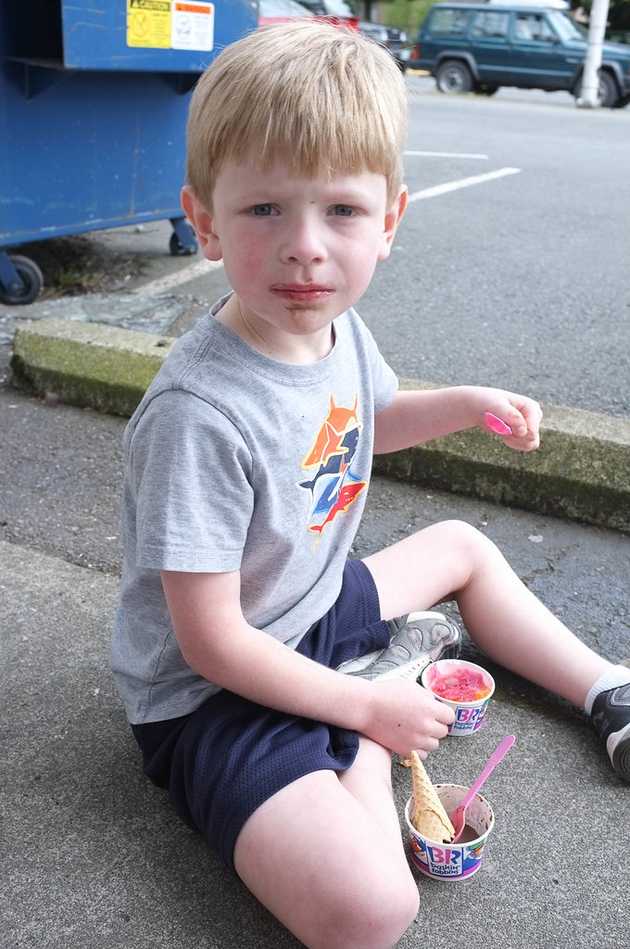