When I was in my early teens, I was lucky enough to have a good friend with a vacation house on the shore of Silver Lake, New Hampshire. In the summer, I would spend three weeks with him and his family. We would fish in the morning, sail (and deliberately capsize) a small Sunfish sailboat in the afternoon, and in between we watched the clouds drift over the nearby green hills. I remember watching ripples move through the lake water, and I was certain of two things: First, I would grow up to be a physicist. I wanted to really understand how ripples worked, how a rock that splashed here could move things over there. Second, I was sure that I would live out in the countryside when I grew up. Cities were loud and dirty and crowded. I wanted to spend my time outside in the fresh air surrounded by trees and water.

I was an awful driver as a teenager. Here’s just one of many cringe-inducing moments. Parents teaching kids to drive is one of the most painful things ever, so my cousin Doug let me practice in his truck one weekend in the parking lot of West Potomac high school. On the wide-open blacktop, I made awkward turns and jerky starts and stops. Then Doug said I could drive his truck back to the house. On the two-lane road in front of the school, I faced oncoming traffic from the driver’s seat for the first time. I had no idea how much space the passing car needed, I had no feel for how big the truck I was driving was, and though a teenage boy would never admit it, it was all kind of scary at the time. I gave the passing car space. A lot of space. In spite of Doug continuing to tell me, in a very calm voice, that I should just keep going straight… I gave that passing car too much space. The next thing I knew, the truck was on its side in the ditch by the road. I don’t think Doug has driven with me since then.

A series of unrelated decisions mean I’m not living the life that my teenage self expected. I gave up physics after one class in college. Picking the University of Washington for grad school brought me to the West Coast, and meeting a girl and a job at Microsoft kept me here. Forget the countryside. I live in the middle of the fastest-growing big city in the United States. For a few years of my Microsoft life, I would go weeks at a time in the winter without going outside at all. Molly and I would get into our car in the garage, drive to the underground parking lot of our building at Microsoft, and then drive back to our garage at home. We’d never see the sun (boo) and never feel the drizzle on our faces (yay).

But one thing has remained constant from my teenage years to today: Thanks to my formative experiences, I hate driving. For fifteen years I lived with cars as a necessary evil to get to work and to get the kids to daycare. (Though thanks to thirteen years of carpooling with Molly, I wasn’t driving for most of that time in the car.) Two years ago, I discovered how practical it was to bike to my new job at Facebook. There are many reasons people ride bikes: To get excercise, for the thrill of racing, to save money, to help the planet. Mostly, I pedal to keep my butt out of a car. I love it like I never loved taking the bus downtown, and I think I’ve finally figured out why. Yes, I live in a city, but I now spend at least an hour a day outside. And it turns out Seattle has plenty of trees and water around; I just needed to get out and enjoy them. Because biking is work amplified by a simple, understandable machine, I even spend more free time contemplating casual physics: force, mechanical advantage, angular momentum. Biking connects me to those dreams I had in my youth. I had abandoned them without realizing it, and now I have them back. 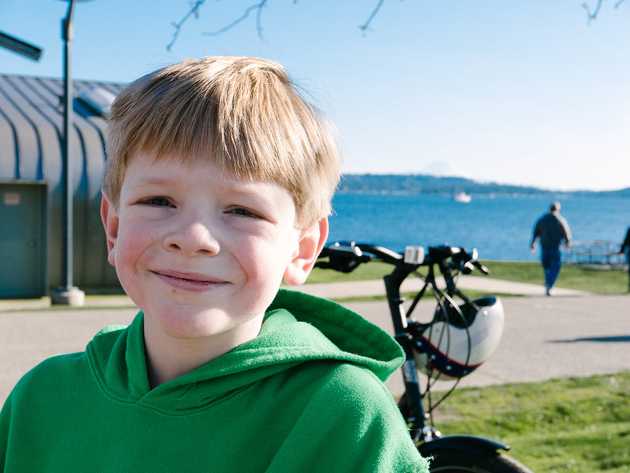 Seattle, with a bike, some of its abundant water, and hints of the trees.