There is a problem with keeping a blog: I tend to write only about the positive things. You’re getting a whitewashed view of 21st-century parenthood. Today, I want to balance that and tell you about one of the parenting problems I’m having right now: Figuring out what in the world is going on behind those eyes: 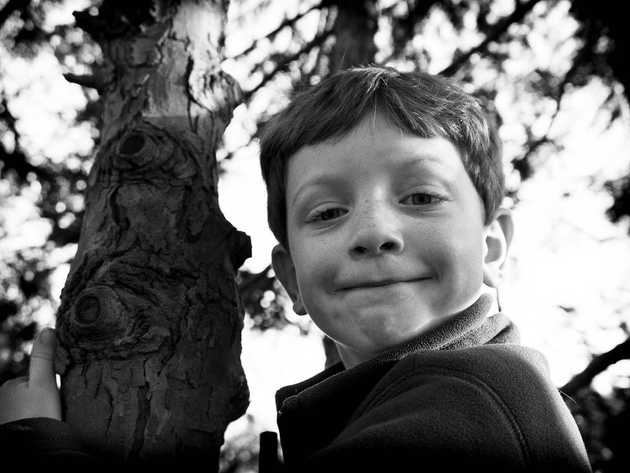 Let me tell you a story. When I picked the kids up yesterday from after-school care, they were in the cafeteria finishing a snack and getting ready to go outside. As I walked down the hallway, I heard one of the teachers in the cafeteria saying in that voice — you know, not yelling but loud & firm, the voice that says I’m done trying to be nice — “Okay, since you didn’t clean up and listen, then you won’t be going outside. You aren’t going outside, and you aren’t going outside…” I get to the cafeteria… sure enough, Patrick is one of the two children who just lost his outside time. Apparently Patrick and one other child had been chasing Alex around the cafeteria instead of helping clean up after snack.

I tried to have a conversation with Patrick about this as he packed his things to leave to try and reinforce this isn’t the way we expect him to ask. “Patrick, you just lost your outside time, didn’t you?”

“Yes,” he answered. “But I didn’t want to go outside anyway.”

That was a lie, of course. He loves playing outside. What’s going on here is a pretty typical Patrick mind game. He’s matured enough to understand that actions have consequences. He’s now two levels past that. Level 1 is directly weighing the consequences. “Hmm. If I keep running around instead of cleaning, I won’t get to go outside. Is that worth it?”

Level 2: Patrick tries to directly manipulate the severity of the consequences. I can’t go outside? Well, I didn’t want to anyway. I’m going to lose a Pokémon card? OK, I’ve got others.

I see this happen in every action/consequence conversation I have with Patrick, and it makes it so hard to use this tactic to get Patrick to change his behavior. He’s stubborn and self-motivated, so it’s hard to come up with consequences that seem more significant than whatever it is Patrick wants to do right now. What’s particularly maddening these past few weeks is “whatever Patrick wants to do right now” seems to always exclude focusing on what teachers or coaches need him to do. Last week’s piano lesson ended early, for example, because Patrick was essentially unteachable.

If this was all there was to it, parenting would be challenging enough. But there’s a new wrinkle these past few weeks: When Patrick doesn’t get his way, he gets irrationally angry. Crying, frustration, impossible to reason with. He doesn’t get to sit where he wanted at the dinner table? Tears. I ask him to brush his teeth before his brother at night? Tears and fighting. It’s really sapping my patience and energy.

For the most part, our life right now is great. I tell every new parent that life gets so much better once your youngest child is five years old. That’s true, but now you know some of the challenges we continue to face. Right now, Patrick’s living under the cloud of me saying that, because of his recent behavior, I’ll be returning his Christmas gifts. That’s the kind of consequence he pays attention to. I’ve also told him he can earn them back with good behavior between now and Christmas. It’s going to be an interesting week.