Tonight, after the kids fell asleep, I remarked to Molly, “It feels like we’ve already had more summer this year than we did all of last year!” Partly it’s that the kids are older, so we’re getting out to do more things. Partly it’s that the weather is simply better. (I’m still scarred from last year: The Year Without A Summer.)

After all, is there anything that says Summer in America more than spending time out on a baseball field? That’s how we started our weekend, with Alex’s t-ball practice. I don’t have any pictures, because my job was to keep Patrick from running out onto the field and grabbing all of the bats and balls. Both of our kids like t-ball so far, but Patrick seems to really like it. He can’t stand to stay home when Alex goes to practice, and if we bring him it’s hard to keep him off the field.

Watching Alex practice t-ball makes it painfully clear how different five-year-olds are from normal human beings. Yes, they’re all having fun out in the dirt, but their powers of concentration are lacking. For instance, Coach Jeff had all of the kids out for fielding practice. Each child was in position, and the coach would roll the ball through the infield to a kid. The kid had to get the ball and throw it to first base. Then the coach rolls the ball to another kid, and things repeat. With the children’s throwing and catching skills still developing, this is already a pretty challenging drill. It’s even harder when your first baseman decides just to walk off the field to get a drink of water, or to walk over to his little red-headed brother to see how he’s doing…

Another Summer in America activity? Spending a lazy afternoon at the local swimming hole. That’s what we did today. In this case, the “swimming hole” is Lake Washington. Apparently, if you’re young, it’s remarkably entertaining to just run into the water and back out again. That’s what Alex and Patrick did, over and over and over, for an hour. Well, Patrick also repeatedly tried to drink the lake water. I hope he didn’t succeed too much. 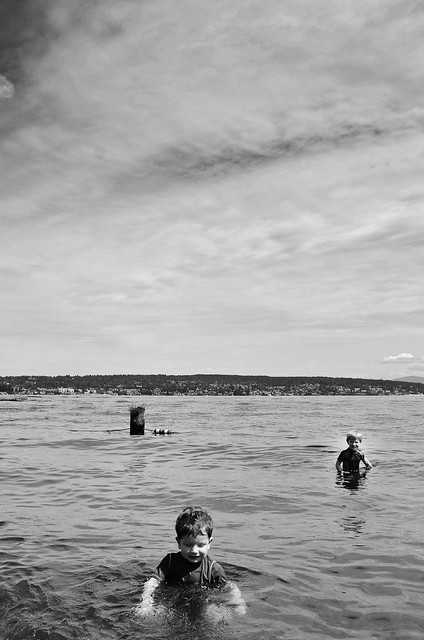 Magnuson Park also has a wading pool in addition to its rocky beach. We spent about half our time in the wading pool, which Patrick liked much better than the lake. Part of the reason was even small waves could knock him over. The wading pool was also warmer. (That the boys got in the lake at all just shows, once again, that there might not be a lot of common sense in the next generation.)

I hope your summer weekends are as much fun!