Are we ready for the next snowday? 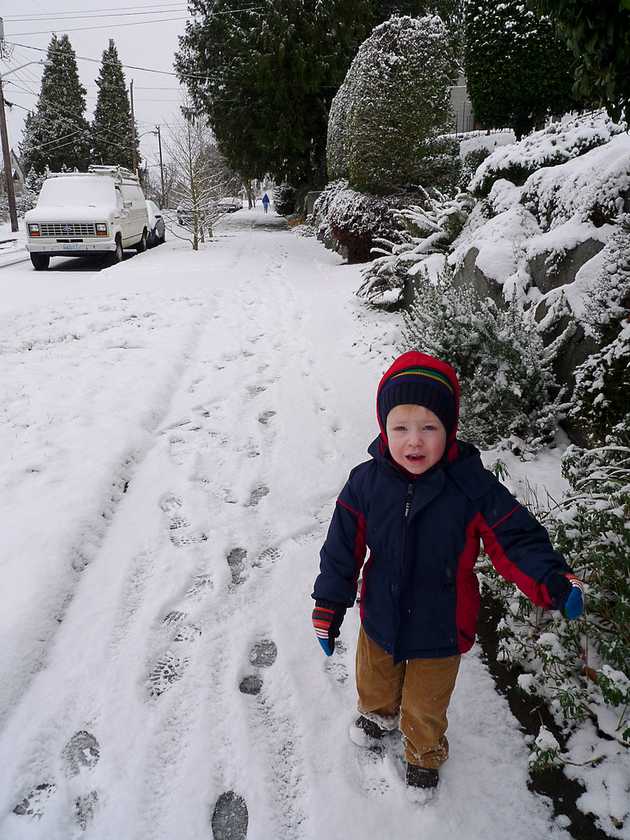 We’ve just finished our first solid week of freezing temperatures in Seattle. Given that it’s very rarely below freezing around here, this is extremely unusual. What’s more unusual is we’ve been getting a lot of snow. Our first snow was last weekend, then it snowed on Thursday (just a couple of inches here in the University District, but our friends on the other side of Lake Washington had between 6 and 11 inches), and as I write this, everything outside has disappeared underneath our most serious snow to date (and one of the biggest snowfalls I’ve seen in my 12 years here). Even the nighttime seems to have vanished with the snowfall; there’s this eerie orange glow everywhere from the reflected streetlights.

So far, Alex hasn’t really enjoyed the snow. I blame that on bad clothing. You can see him here for Thursday’s snow in just sneakers and regular pants. He was complaining of the cold after about 10 minutes. On Friday, Molly managed to get to REI to get snow pants and snow boots for Alex. Hopefully he’ll learn to like playing in the snow, because it looks like we’re going to have a lot on the ground in the morning.